WSUS Cleanup in an SCCM has been done before - many times but I wanted a solution that focussed purely on the built-in WSUS cleanup options and something that was simple to deploy in any SCCM environment - using an SCCM Configuration Item.

The database that WSUS uses to store metadata about all the available updates has become very large over the years, covering more and more Microsoft operating systems and software. It is highly recommended by Microsoft to perform regular WSUS database maintenance as suggested here: Complete guide to Microsoft WSUS and Configuration Manager SUP maintenance.

When WSUS is used in conjunction with SCCM, SCCM can perform some automated cleanup tasks after each WSUS sync job has completed. In SCCM 1806 this cleanup is further improved and documented here: Software Updates Maintenance. Specifically:

Starting in version 1806, the WSUS cleanup option occurs after every sync and does the following cleanup items:

The Expired updates option for WSUS servers on CAS and primary sites.

Configuration Manager builds a list of superseded updates from its database. The list is based on the supersedence behavior in the Software Update Point component properties.

A cleanup for software update configuration items in the Configuration Manager database occurs every seven days and removes unneeded updates from the console.

The document then goes on to state:

The WSUS Cleanup option in SCCM is exposed here (in the configuration of the root SCCM sites’ SUP properties) : 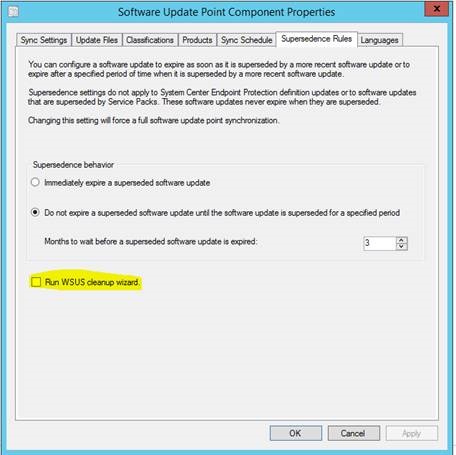 Unfortunately what the Microsoft documentation does not cover is the order in which to run the cleanup jobs and on which level of the WSUS hierarchy.

In an SCCM hierarchy there are usually multiple tiers of WSUS:

Note: WSUS servers can also share the same SQL database so the maintenance would only need to be run once per database, rather than once per WSUS server, not that it would harm anything by running it multiple times per database.

There are comments from those in the know that certain WSUS cleanup tasks recommended-order-for-running-cleanup-wizard-in-wsus-upstream-replica-hierarchy should only be run from the top level WSUS down, so to clarify for sure, I went ahead to see how the SCCM team had implemented WSUS cleanup in a hierarchy by analysing the wsyncmgr.log:

So above we can see that SCCM is processing the ‘ decline updates’ part of the cleanup in the correct order - from the TOP WSUS, down.

Now to process the remaining WSUS cleanup options that Microsoft have stated SCCM doesn’t do :

I have taken some Powershell from @Bdam55 to cover the above three WSUS cleanup tasks and converted it to run as an SCCM Configuration Item on a schedule:

The actual cleanup of WSUS is nothing new, the PowerShell used here is regularly available on the internet, the cool thing is that this is a CI and is running in the SYSTEM context.

The script is designed to run against WSUS in an SCCM 1806 and above environment, as the additional WSUS Cleanup rules were introduced in this version.

Here are the benefits of this deployment method of the cleanup script, over say something like Group Policy Scheduled Tasks or BigFix scheduled script:

When the script runs on the SCCM Site Server, it actually connects to each of the SUP (WSUS) servers in the site using PowerShell remoting (invoke-command) and initiates a cleanup if a sync job is no running. If the script detects it’s running on the root WSUS server, it will add a large delay in processing the cleanup, to give the lower level WSUS cleanup jobs time to finish.

As per https://blogs.technet.microsoft.com/meamcs/2018/10/09/resolving-wsus-performance-issues the script now also configures the minimum values for:

If the SCCM hierarchy is expanded to cope with additional load, or new servers are brought online to do a side-by-side migration, the Configuration Item should kick-in and cover these off automatically.

Thanks to: @Bdam55 for the Add-TextToCMLog function and most of the WSUS cleanup script.

Any questions, feel free to reach out.