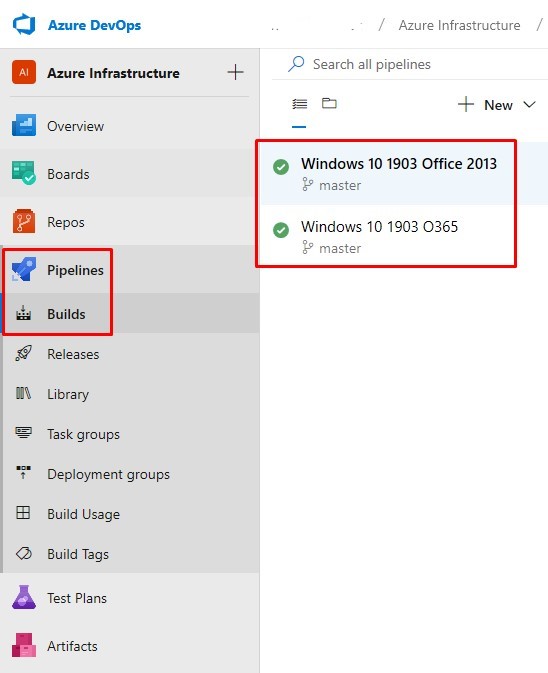 Ok, it’s difficult for me to explain what this post is about using just the title and subtitle so I’ll try and do a better job here.

With Windows Virtual Desktop being close to GA now, I wanted to put a continuous build solution together for the Windows 10 Azure VM Image which will be used to build the WVD solution from. In English this means we will be building a traditional Windows 10 gold image with all our apps and static config etc. and then using this image to deploy Azure VMs from, forming the Windows Virtual Desktop Host Pools for RemoteApps.

The gold image will contain all applications, installed using Packers’ PowerShell Provisioner. Not only is a Build Pipeline used but a Release Pipeline is then run to deploy the WVD solution to Azure using this latest Build image artifacts and the WVD ARM Template.

As a regular consultant for SCCM/ConfigMgr/Intune, using Devops + Packer + Azure to build Win10 machines from a gold image seems similar in approach to SCCM Task sequences (B&C, Deployment), however rather than using the Microsoft VLSC ISO as the base to start with, here we have image transform steps like:

A close alternative to the HasiCorp Packer steps in the Azure Devops Pipelines, as described in this post, is the preview service from Microsoft: Azure Image Builder which is actually based on Packer as well - only in Azure Image Builder we can submit the whole job as an ARM Template - I will hopefully get time to test this preview service out soon and issue another writeup

So before you get to the TL;DR section, these are some of the cool things I’m going to use to put this solution together:

Most of the ideas for this solution came from @samcogan’s post: Building Packer Images with Azure DevOps. Thank’s Sam.

If you follow the rest of the post, we’ll see how this template is built, what the components do and how they integrate with Azure Devops and Azure.

The Azure Devops Build Pipeline will be used to run Packer, which takes an Azure Marketplace Win10 1903 EVD image (with or without O365 ProPlus) and builds a VM from it. Once the VM is provisioned, Packer PowerShell Provisioner will connect to an Azure File Share and begin to install your business applications. Once the custom config/apps are finished, Packer will sysprep, shutdown and convert the VM to an Azure VM Image - following this, all the other resources are cleanly removed.

Start off by creating a new Project in Azure Devops:

Give the Project a name.

Choose Private, unless your Org allows public projects, in which case there are benefits like extra runtime minutes for the hosted agents - which is extremely handly for long running Build tasks.

I expect you’ll want to use Git based version control, but it doesn’t matter for the purposes of this project, same goes for work item process - basic is fine. 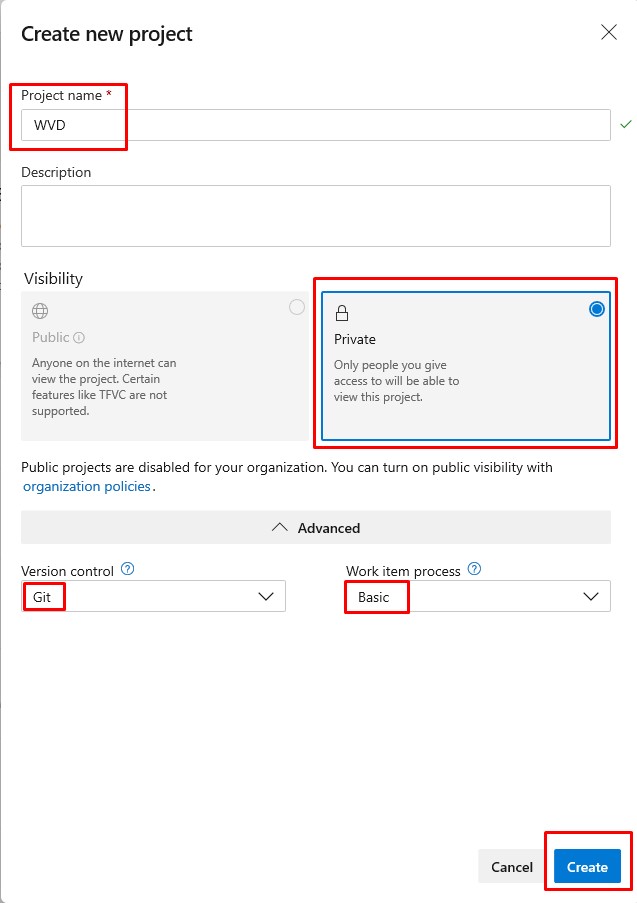 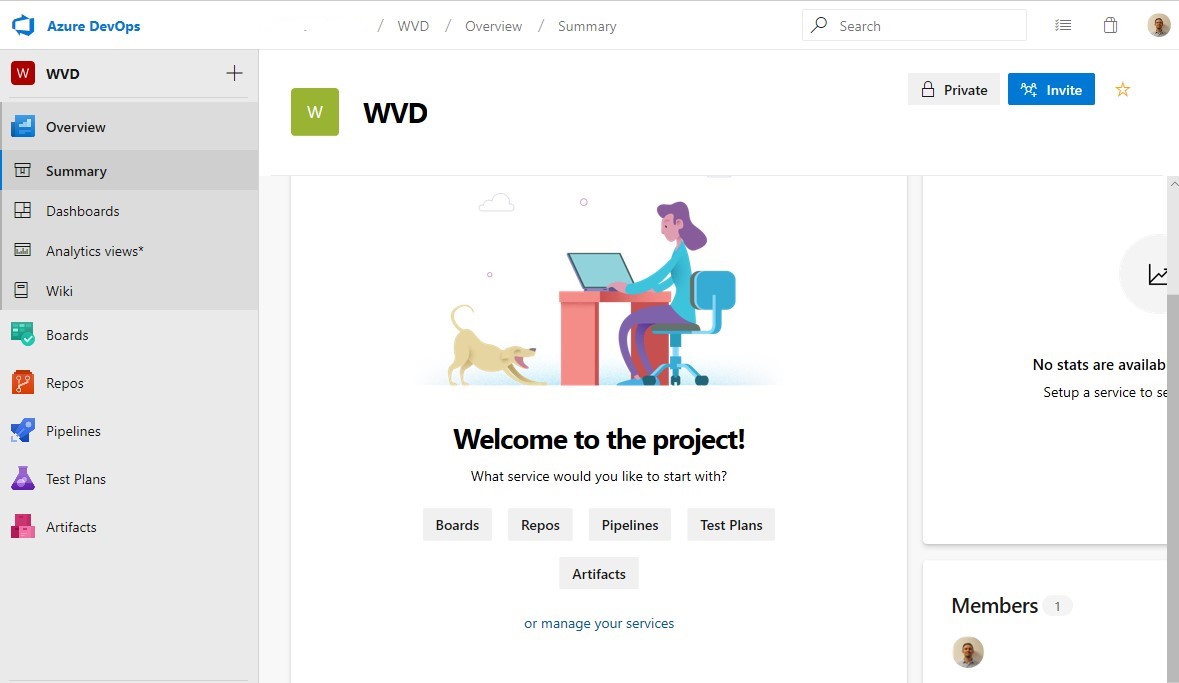 You can Clone the repo into VSCode if you wish. I’m going to show the process using the Devops web portal.

Initialise the Repo that gets created automatically: 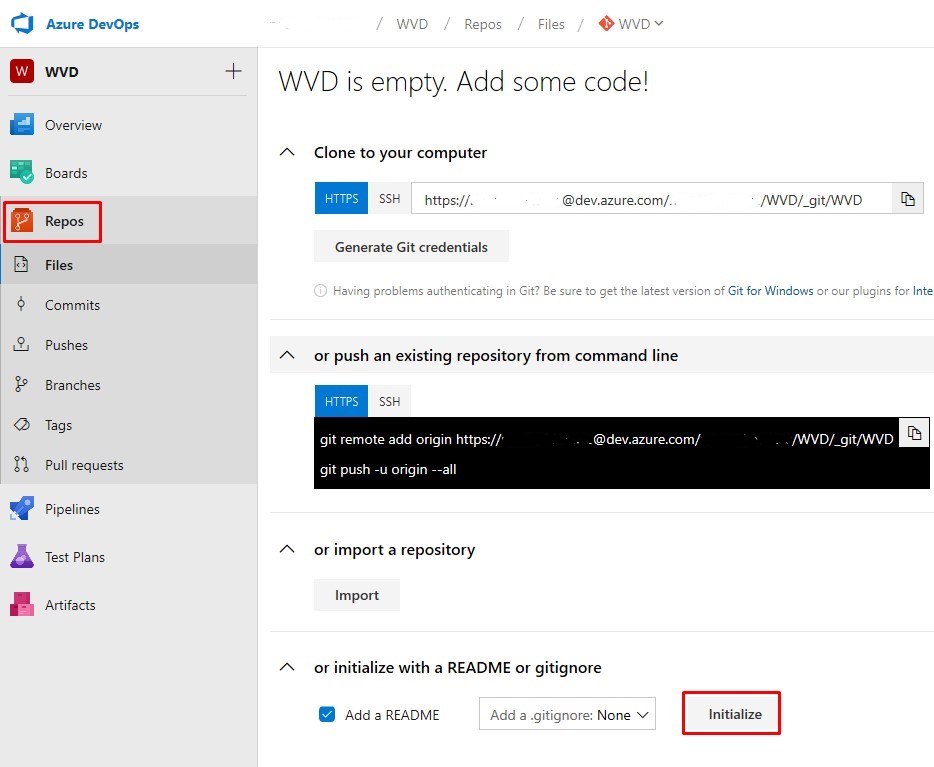 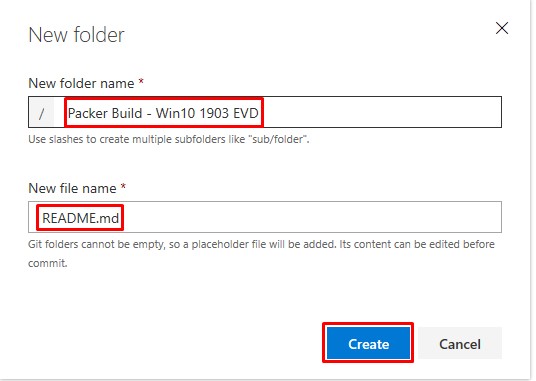 Commit the Readme in the new folder: 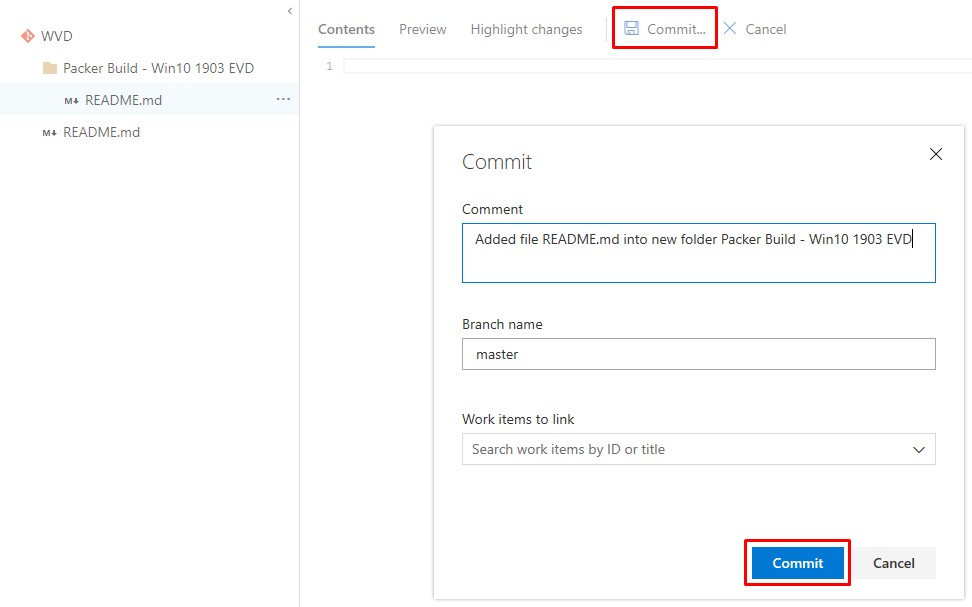 Repeat for the ARM Templates folder: 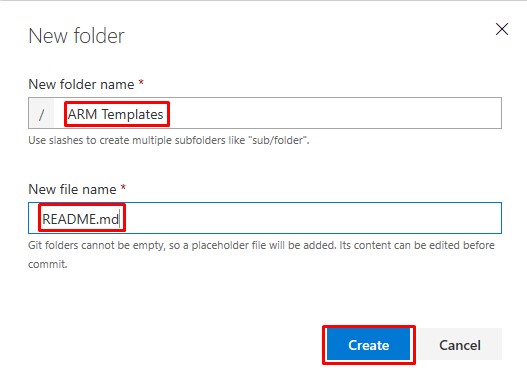 Even though I already have an existing WVD Host Pool (created using the Azure Portal originally) I am using the Create and provision new Windows Virtual Desktop hostpool template rather than the Update Existing Windows Virtual Desktop Hostpool template. Reason being, it fits better with the release process in my opinion. I don’t want to deallocate or delete the existing Host Pool VMs (which is what the latter template does) until I’m satisfied the new VMs are working.

Upload the template to the ARM Templates folder: 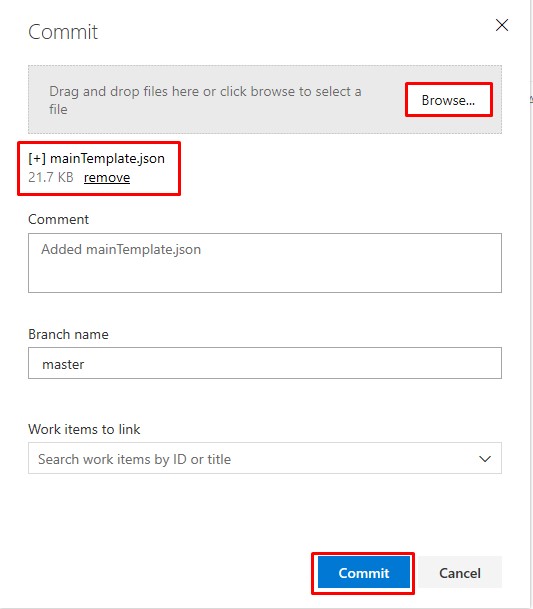 You can delete the README.md now (so that it doesn’t appear as a Build artifact later on): 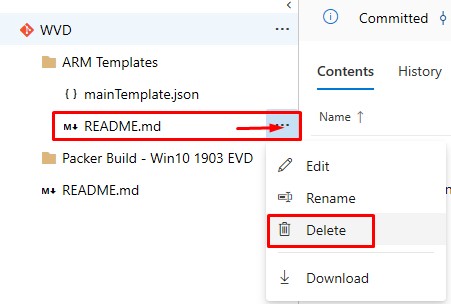 Now lets get an example copy of a Packer template for Azure based on using an existing image: windows_custom_image.json 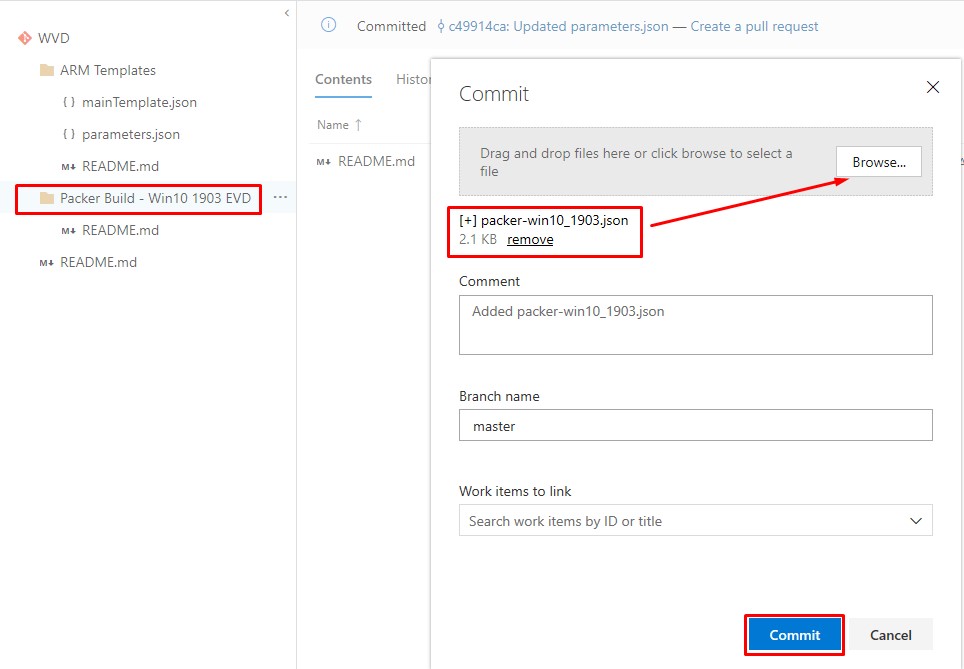 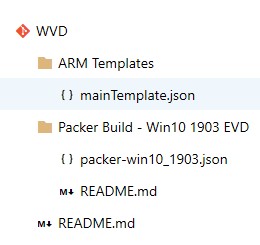 The repo and template files structure is now complete. We will need to edit the Packer template now, but the WVD ARM template should remain static.

Packer will need an Azure Service Principal in the Azure subscription where the WVD machines will be built. Packer creates a Resource Group, Key Vault, VM, Storage and networking during each Build - which it then deletes at the end, after the VM Image has been successfully created. My Service Principal has Contributor access at the Subscription level but you can of course allocate the individual roles instead.

How to: Use the portal to create an Azure AD application and service principal that can access resources

Get the Application ID and the Secret of the new Service Principal. Keep these handy for a while (but not saved to disk) as we’ll be using them a few times.

In your Repo, edit the packer-win10_1903.json and remove the values from the client_id and client_secret variables (This is important - don’t hardcode this secret info into variables - we will use Azure Key Vault later). It should look like this:

We’ll use an Azure File Share which will be mapped as an SMB drive from Windows during the Packer build process. This will host the binaries/packages for all the application installs that will go into the gold image (Azure VM Image).

Once your File Share is created, upload all your application install sources: 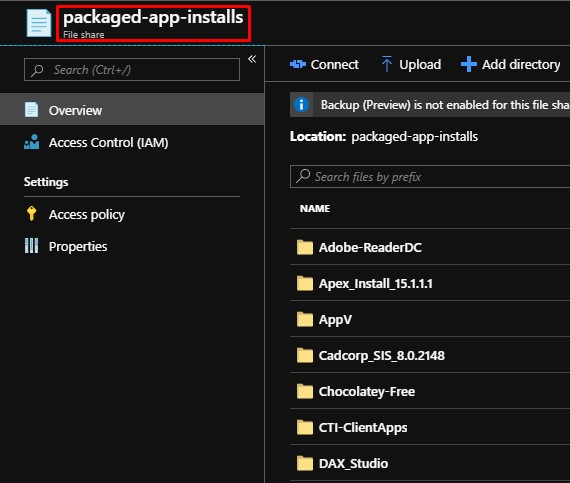 Ii you click on Connect you’ll be able to copy and paste the UNC path for the share that we’ll need to our Devops variable later: 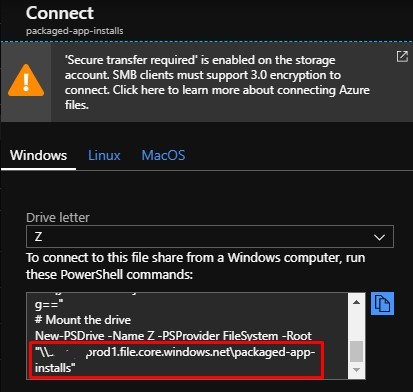 Finally, get the Storage Account name and Access Key so that we can store it in the Key Vault later on.

If you don’t already have one, create a Service Principal as a Windows Virtual Desktop RDS Owner: Tutorial: Create service principals and role assignments by using PowerShell

Create a new or use an existing Azure Key Vault for the purposes of storing our secrets that will be used during the Build and Release Pipelines.

There are different methods for retrieving and using secure variables in Azure Devops, one way is to query the Key Vault directly, each time a Pipeline task runs, like in this post: Using secrets from Azure Key Vault in a pipeline

Once you have chosen which Key Vault you will store your secrets in, go ahead and add the following Secrets: 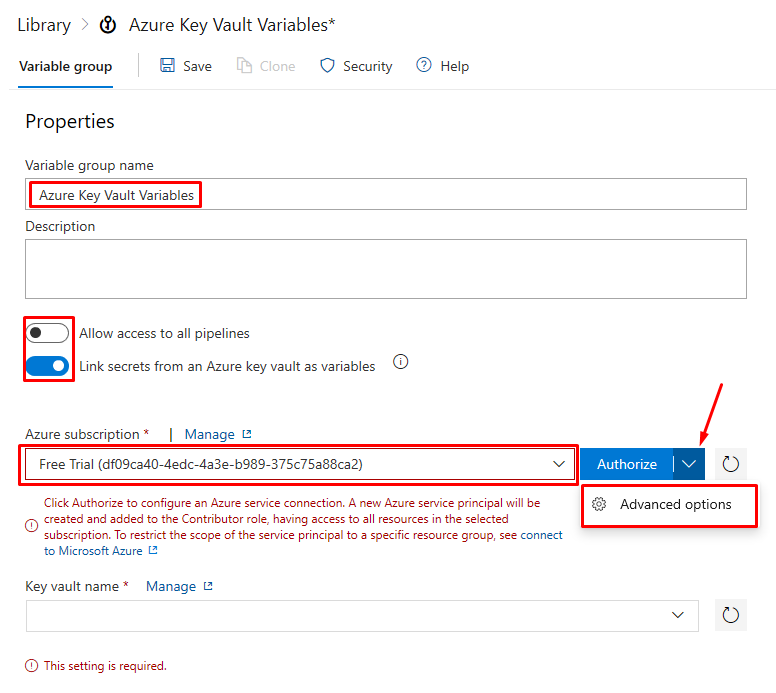 Click on the link for Use the full version of the service connection dialog: 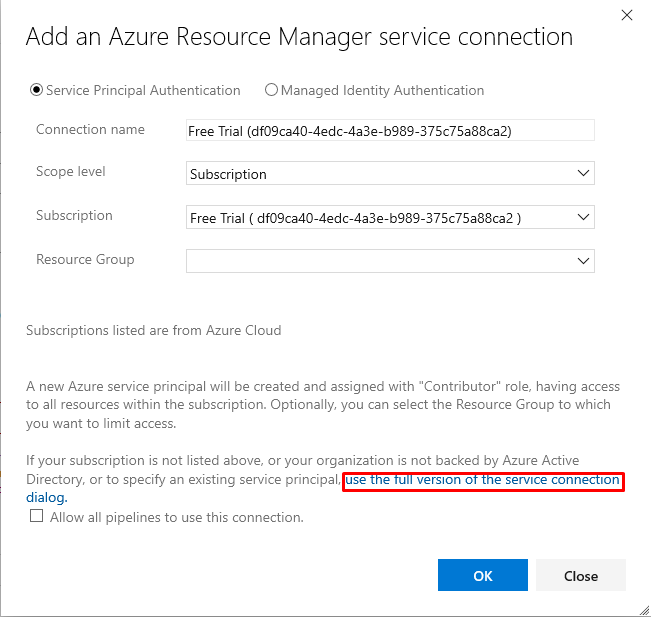 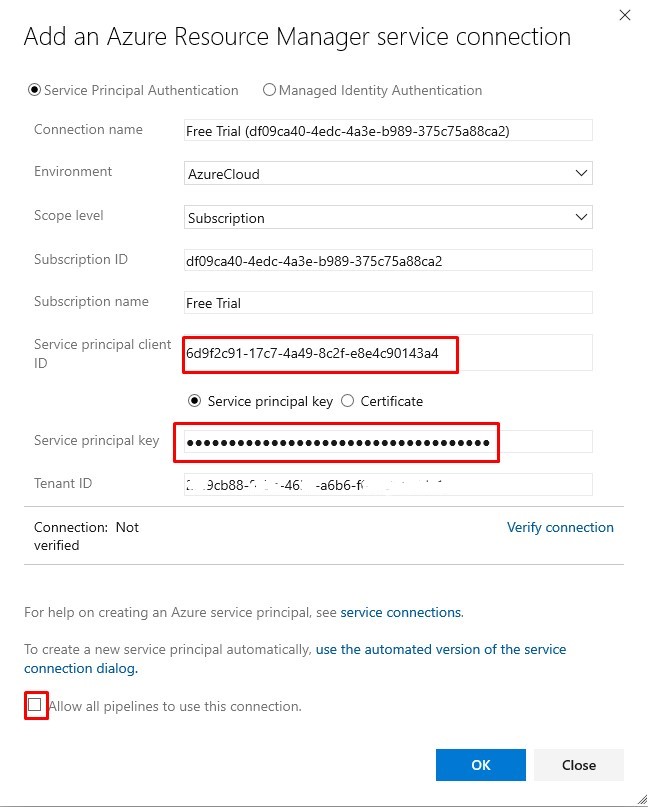 Select the Key Vault that you will use to store the variables/secrets:

Add the variables from the Key Vault in Devops: 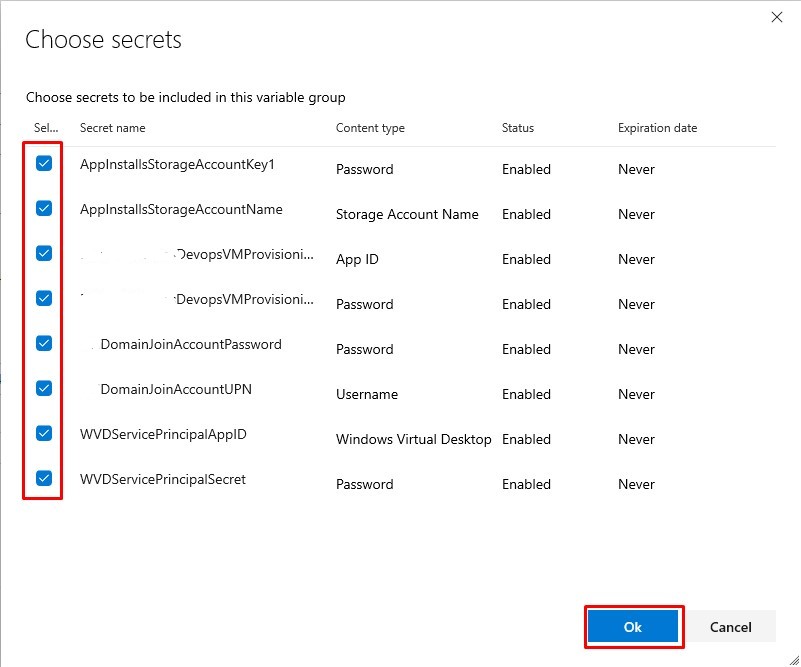 Save the new Variable Group: 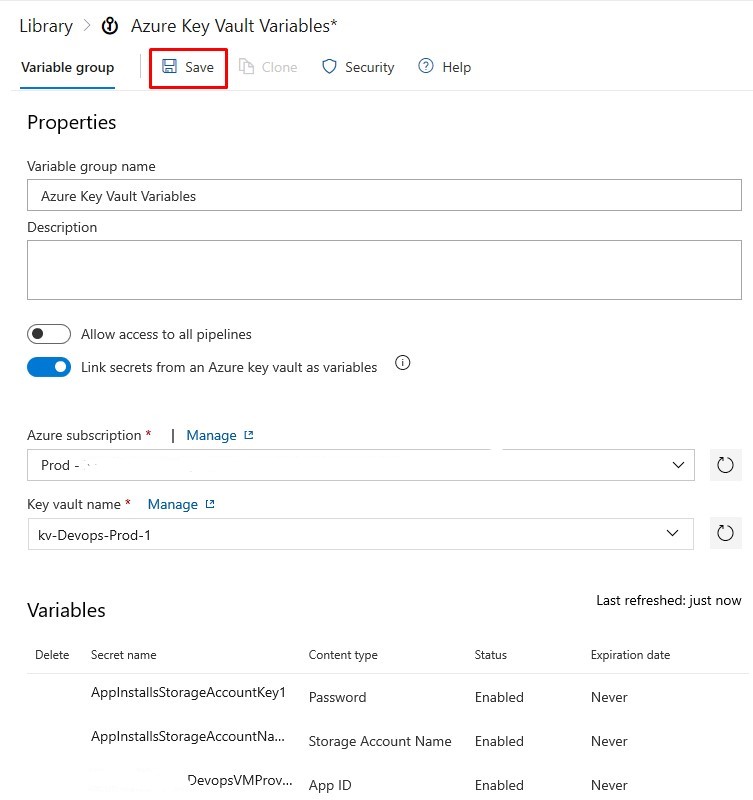 The secrets are now ready to be securely access from the Build and Release pipelines:

We’ll also need a connection so that Devops Pipeline Tasks (like the deploy ARM template) can authenticate natively without passing any additional credentials during build time.

The setup is almost identical to the above key vault connection in that you use the existing Service Principal again: 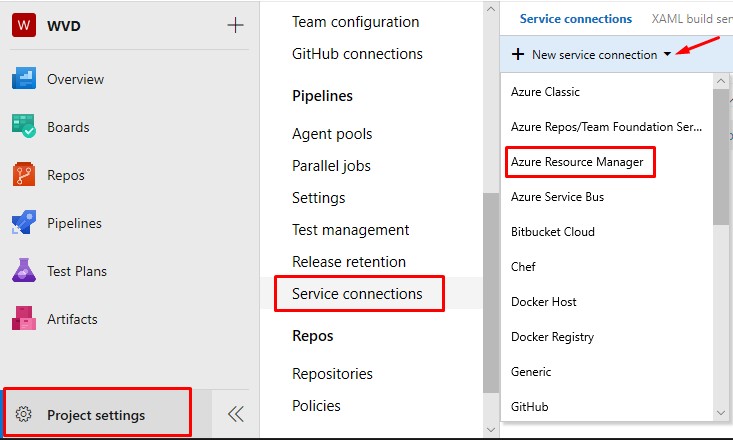 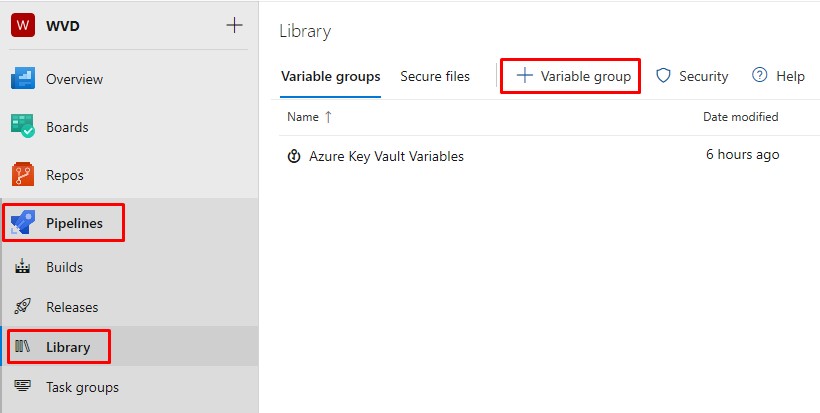 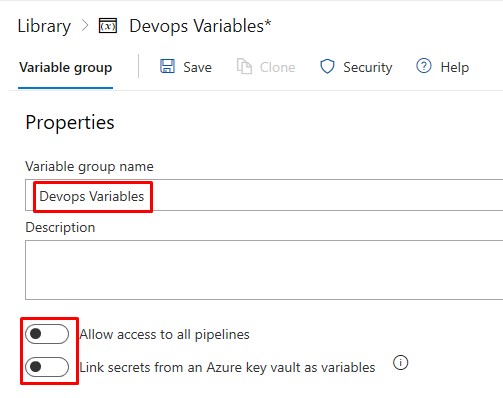 Add the following new variables and their associated values.

Seems like the Packer template on Github has an undocumented and unrequired variable/builder property. Go ahead and delete object_id references from the Variables and Builders sections: 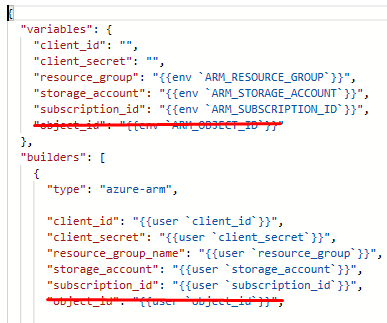 Earlier we edited the Packer template to support the client_id and client_secret secure variables for our Service Principal.

For the Packer build, the only other secure variables we’ll use are the Azure Storage Account name (the one that contains the Azure File Share as detailed above) and the Access Key for said Storage Account.

So the variables section should now look like this:

Packer can accept variables passed from the Azure Devops tasks as environment variables. Don’t hard code any values, we will be passing the values (mostly from the Variable Group) later on when we the Build and Release pipelines.

Checking the Packer build configuration reference we can see that if we’re generating an Azure VM Managed Image like this:

then we need to use some different properties in the json template.

In the variables section, delete lines:

You may have noticed that we just deleted the "resource_group" and "storage_account" variables from the variables section, so naturally we need to do the same in the builders section too, as well as removing some others:

Edit the Packer template again (packer-win10_1903.json) and delete the following lines from the builders section:

Now for adding a whole bunch of new properties to the Packer builders. I won’t go through each one individually here, as you can lookup the details in the Packer build configuration reference.

Explanation: Yes, I’ve been a bit naughty and hard-coded some of the property values. This is because I know that the production VNET name is unlikely going to change, for example.

You will notice that in this configuration the Packer VM is deployed into an existing production VNET: "private_virtual_network_with_public_ip": "True",. You can of course use a dedicated, isolated VNET for the Packer build run (default) but this comes with it’s own challenges. In the environment this was run against, Azure Policies prevented VMs from being deployed to different VNETS. There are also Storage Account firewalls enabled, allowing only access from certain subnets/VNETS in the subscription.

Lets have a look at some of these new builder properties. A lot of these are self-explantory, so I won’t cover those obvious ones:

At this stage we could actually run an Azure Packer build and it should sysprep and output an Image for us, but there are some further tweaks required first and we need at least a few applications installed in our Gold image from the Azure Files Share.

Packer Provisioners “use builtin and third-party software to install and configure the machine image after booting”. So after the builders stage is finished, we can start to run our PowerShell code before restarting and then sysprep’ing.

In my PowerShell Provisioners I want to map a drive to the Azure File Share (created earlier) so that all the software for the Gold Image can be installed over SMB.

Installing Chocolatey is also a good idea as many of the common packages can be installed directly from the public Choco repo.

Edit the Packer template again (packer-win10_1903.json) and add two new powershell Provisioners above the existing sysprep section, so the provisioners should now look like this:

You can grab the finished copy of this Packer build template on my Github repo packer-win10_1903.json.

We are ready to put all the components above together into a Build Pipeline and initiate the build run to generate the Gold image.

As we go through these steps, don’t forget to save regularly. You can save into the default root folder: 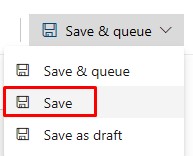 In your WVD Devops project:

Now we have an Azure VM Managed Image and some Build Artifacts, we can put together the Release Pipeline.

The Release Pipeline will use the Azure VM Managed Image generated by Packer, to deploy a number of identical VMs into a Windows Virtual Desktop Host Pool using the WVD ARM Template (that’s already in our Repo).

Naturally, this assumes you have an existing WVD environment that can be tested with.

I very much doubt you made it this far - to be honest, I struggled myself. But if you did, I think you’ll see that you can now quickly edit the Packer template, run a Build, and then Deploy a Release, all within the space of an hour.

This brings a lot of moving parts together into one slick solution, with great logging and the option of a fully enabled CI/CD Pipeline.